AUSTIN — Today, Dr. Dawn Buckingham was sworn in as the 29th Commissioner of the Texas General Land Office (GLO), making history as the first woman to hold this office in Texas. Commissioner Buckingham was issued the oath of office at the Texas State Capitol by the Honorable Judge Melissa Goodwin of the Third District Court of Appeals, Place 4. After the formal ceremony, Commissioner Buckingham spoke to all in attendance, including family, friends, supporters, as well as hundreds of Texans from every corner of this great state.

“It is an honor to be elected where I can continue doing what I love the most – serving the people of the great state of Texas. As Land Commissioner, I will continue to fight for Texans and always do what is right, not just convenient. I am extremely thankful the people of Texas have entrusted me with this vital responsibility to protect our individual freedoms and safeguard our communities. I will not let them down,” said Commissioner Buckingham. 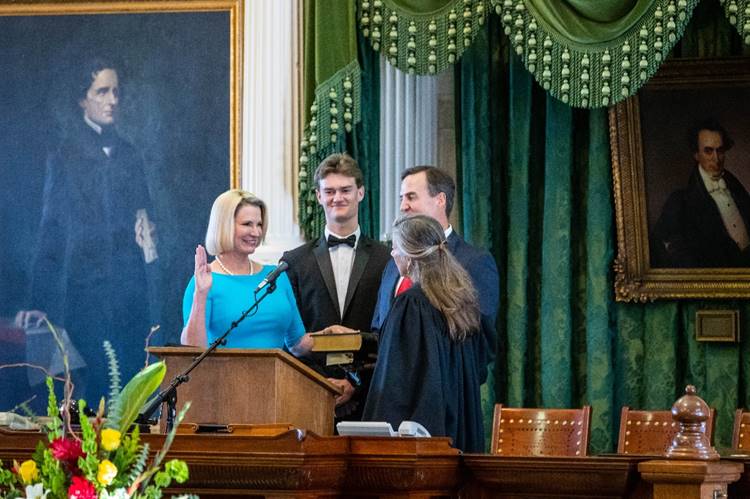 After the general election in November 2022, which was preceded by more than a year of crisscrossing the state to meet and speak with Texans face-to-face, Commissioner Buckingham immediately got to work for the people of Texas by selecting an unparalleled transition team for the GLO.

As the new leader of one of the most important offices in state government, Commissioner Buckingham stands ready to preserve the Texas we love by fighting Biden’s inflation using the unleashed power of Texas energy, ensuring every child in Texas receives a high-quality education, and securing our southern border to keep our communities safe.

Commissioner Buckingham has deep roots that connect to the very heart of Texas as her family was among the first settlers to arrive in Texas seven generations ago.  Her “never quit” attitude was passed down from her pioneer ancestors and fueled a life brimming with accomplishments that began in humble circumstances in a small town along the Texas coast. As an outdoorswoman, avid hunter, and former volunteer firefighter, Commissioner Buckingham is no stranger to a challenge. In this same vein, she worked her own way through college, graduating from The University of Texas at Austin, and going on to receive her medical degree from the University of Texas Medical Branch at Galveston as well as holding several leadership positions in local, state, and national medical organizations.

Commissioner Buckingham’s legacy as a history-making Texan started when she became the first woman to be elected to represent Senate District 24, and the first Republican from Travis County ever elected to the Texas State Senate. As Texas’ next Land Commissioner, she brings a lifetime of experience, determination, and the true independent spirit of the Lone Star State to this office.

Commissioner Buckingham and her husband of 31 years, Ed Buckingham, have two children and live in Lakeway, Texas.