Plan details how state and local governments will use funds; read action plan and find more information at recovery.texas.gov/mitigation

"Texas continues to move the recovery effort forward, despite new challenges presented by COVID-19," Commissioner Bush said. "HUD's announcement that it has approved our state action plan for mitigation funding is very welcome news. While teleworking and abiding by state and federal recommendations for health and safety, we continue to work each and every day to get federal resources to communities to rebuild and mitigate against future disasters."

On February 3, 2020, the GLO announced modifications to its original draft of the state action plan, which were guided by input gathered through an extraordinary public outreach effort. The Texas General Land Office (GLO) incorporated valuable feedback from local leaders, residents of affected communities, and other stakeholders, received during a 50-day public comment period - including eight public hearings across a 140 eligible county region, seeking input on the distribution and eligible uses of $4,297,189,000 to assist eligible communities with mitigation projects. HUD had until April 3, 2020, (60 days from the date of submission) to review the action plan and approve or reject the plan with comments.

The GLO hosted twice the amount of public hearings required by our federal partners because we believe local jurisdictions know best how to protect their communities. This historic level of community input helped shape revisions to a stronger, more robust action plan that will improve the resiliency of Texas homes, business and infrastructure from future storms.

Revisions made to the action plan include:

About the State Action Plan for Mitigation

The state's action plan provides for the distribution of mitigation funds based on HUD's requirements outlined in the Federal Register notice released on Aug. 30, 2019. These funds were appropriated by Congress on February 9, 2018. For additional information on the timeline, please visit recovery.texas.gov/mitigation.

All CDBG-MIT activities must meet HUD's definition of mitigation: Those activities that increase resilience to disasters and reduce or eliminate the long-term risk of loss of life, injury, damage to and loss of property, and suffering and hardship, by lessening the impact of future disasters.

The draft plan incorporates critical stakeholder input received during CDBG-MIT planning public hearings conducted in September, regional input sessions at various councils of governments, and a mitigation needs survey that captured detailed information from 416 respondents across the state. Additionally, the GLO consulted with federal and state agencies to develop the Mitigation Needs Assessment and the state's proposed mitigation programs and competitions.

In accordance with the CDBG-MIT requirements, to address risk related to hurricanes, tropical storms, tropical depression and flooding, and to expedite mitigation funding, the GLO will directly administer and oversee the following competitions and programs:

Regional Mitigation Program ($500 million): Councils of Governments (COG) impacted by Hurricane Harvey will develop a method of distribution (MOD) to allocate funds to local units of government and Indian tribes.

Regional and State Planning ($214 million): Provides funding for regional and state planning studies and tools that work to reduce risk and impacts of future disasters. 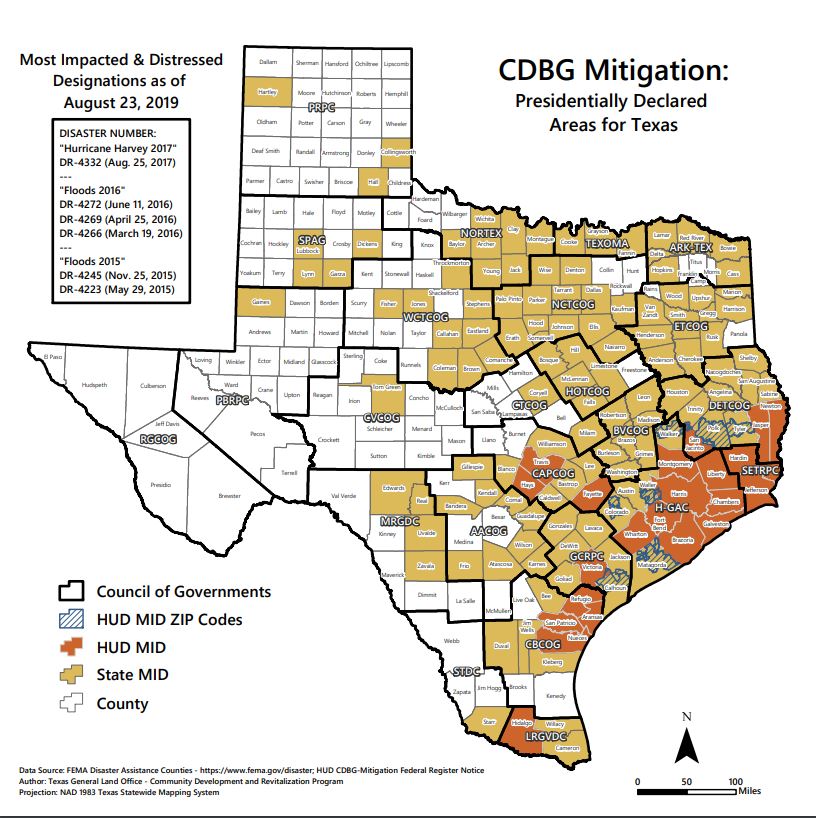 In addition to short-term housing in partnership with the Federal Emergency Management Agency (FEMA), the CDR division of the Texas General Land Office was appointed by Texas Governor Greg Abbott to administer both Community Development Block Grant Disaster Recovery (CDBG-DR) and Mitigation (CDBG-MIT) on behalf of the state of Texas. More than $14 billion have been allocated for recovery and mitigation following Hurricanes Rita, Dolly, and Ike, the 2011 wildfires, the 2015 and 2016 floods, Hurricane Harvey, 2018 South Texas floods and the 2019 disasters. These grants can be used for a wide variety of activities including housing redevelopment, infrastructure repair and long-term planning. For more information, please visit recovery.texas.gov.